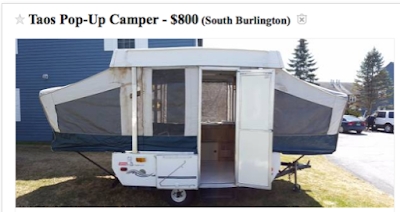 October 2018. Our old used Coleman Toas is set up at a friends house in the woods for the last two years and doing great. We don't tow it much, but we do go for overnights there with the kids. We only take it down for the winters so it stays dry and aired out.

May 2016. Got a camper  on Craigslist for $800. It's a 1997 Coleman Toas. Canvas is almost gone, but it's waterproof. Put on new tires. Family loves it. Of course, we're using it more in the back yard then camping. Here's the post.

Summary of My Research int Pop-Ups and ultralight RVs.

My Craigslist Alerts for Small Pop Up Campers

I got a free account on Craigslist and set up alerts. I get an email right when a new listing is up. This will keep me from getting fired from too much surfing during work!


Pop up campers around 1500lbs dry weight or less.

There's a Tesla Model 3 tracker up linked off this article

"Your order in the production queue is determined by when you configure your car and confirm your order."

I reserved a model 3 a hour before the unveiling show started! So exciting! Shaw happened to be up since he went to sleep extra early, then a passing "I.C.E." Harley woke him up...ironic...or fitting?! Here's the video of him watching.


Here's the Video Of The Event

Click here to Jump right to the part of the Video where the Tesla Model 3 arrives on stage.

There are video pans of the actual "drivable prototypes" that were on stage.

Here's an interesting snipit from a post by Sebastian Blanco over at AutoBlog who got a test ride.
"The driver also said that the 3 will be available as AWD, but when it's not operating in AWD mode, the 3 is RWD"...snip..."Luckily, the 3's all-glass top is an option, and not one I'd choose."

That makes me think, "Subaru Forester Replacement" and "Roof Rack!"


The Verge has some good photos here too.

We all know now: 5-star safety rating in each category, not an average. < 6-second 0-60mph. $35,000. Seats five comfortably. 215 or better range. "Frunk" and Trunk that means it can fit a 7 foot surf board inside. Autopilot and supercharger ready.


What I found interesting looking very closely at the opening videos again was:

Questions I have About the Tesla Model 3 Are:

Following the news leading up the the event

Here's Why I Might Actually Buy a Tesla Model 3

I've been following Tesla Motors since their first car. The mission back then was to build some expensive electric cars that funded the R&D to learn how to make an affordable electric car. That car will be announced March 31st, and available to reserve for $1000.00 on during the event carried live at Tesla.com.

Here's a blog post today about how to reserve a Tesla Model 3.

The 2002 has 220,000 miles and is on its last legs for safe and long family trips at least. It's a beater for a long time if we need one. We use it as a town car mostly. So, by the end of 2017, when the Model 3 is slated to appear, it will be time for a new car. And we certainly don't need TWO all wheel drive cars! One low gas mileage SUV is enough. The Forester averages about 22 MPG and lower in winter around town. Ridiculous. It's very stable and safe though, so it's good for towing a tent trailer for a family vacation full of crap, including the roof rack. And for snow, bumpy, muddy dirt roads, 300 miles trips between fillups, etc.

Now, I've always bought cars for cash, except for '09 we paid off quick, as my grandmother taught me. She said that if you don't have the cash, you can't afford the car, and car loans are some of the worst in the world due to the declining value of new cars once you buy them. I believe this. So I'm in a bind.

We'll see what the details are in a couple of weeks on the Tesla Model 3 though! I want to be part of the revolution in mass market EVs that I think the Tesla Model 3 will be a big part of kicking off, similar to the Ford Model T.