I was born in 1966 and I'm getting achy. I need reading glasses now, and our second child just arrived! I'm glad I waited this long to get married and have kids though, I would have been a worse father and partner earlier. I'm blogging here to share and learn from others as I navigate a challenge that feels uncharted, but is completely notso many have faced before me, but feels completly new and unknown to me.

I'd love to hear from you in the comments. 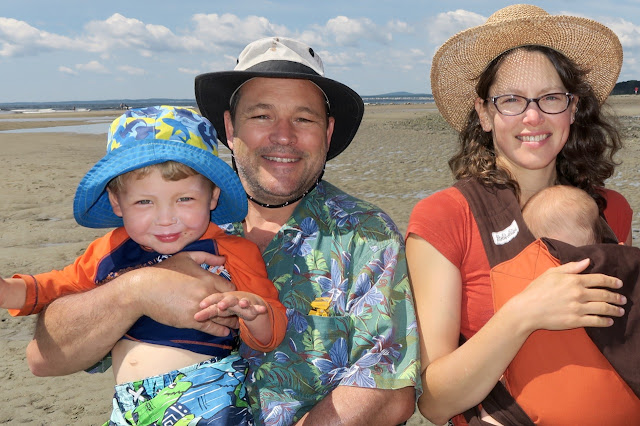 I live with my wife Laura, and son Shaw (born in early 2012) in southern Vermont, USA. I'm sort of half a geek and half a teacher.  I work at Marlboro College's graduate school as the chair of the Teaching with Technology MAT program.

Back to those damn reading glasses are the latest crushing blow to my self-esteem and physical prowess. They suck,  I don't care if I look smarter and cuter. I had 20/15 vision into my 40s and didn't need glasses until I was 48. I feel like a grandfather peeking out over my cheap drug store reading glasses. Oy!

This is a still from a video of how to teach your unborn child about Star Trek.

One of my heroes, the actor Leonard Nimoy (Spock on Star Trek), died the same day Ivy was born.
Our household has very little screen time for young folks, like once a week with some phone/computer time in between, and no Cable, but the kids can watch Star Trek. I believe Star Trek is STEM education and positive humanism, wrapped in entertainment. In Spock's name, I say, may both my children Live Long And Prosper.


About settling down at a rather advanced age. I met Laura in 2006 while working at Antioch College in Keene, NH where she was getting her early childhood teaching certification and Masters degree. We had chemistry! And we flirted, but we were both with other people, so that was as far as it went. We kept up occasionally by email and when I was finishing NYU's ITP program, we reconnected in New York City while she was visiting her parents. This time, I was single, and she was about to be.

I pounced. We had a few dates in the city, and then and  flew up to Burlington Vermont where she was teaching for a weekend. And then we dated some more, and decided to move in together where the first one of us found a job. Laura got a gig at her dream school, the Neighborhood Schoolhouse, and since it was The Great Recession, any job with full benefits was where one went! And so Brattleboro it was. To my surprise Marlboro College had a little educational technology program I began to teach in. We moved in together for a full year to see if we were really compatible, then got married, bought a house, and then had kids.

Basically, after a couple of decades of being a laptop nomad, having 35 addresses in my Amazon account, and never having a job or relationship for more than about two years - I settled down.


I've been writing, teaching, managing and geeking since the early 1990s when I left carpentry and film production to follow the then nascent World Wide Web to San Francisco, California. I wrote shorts for Wired Magazine and worked as an early Webmaster for a small ad agency. And I cofounded the NoEnd Web Developer's group and found that I deeply identified with the term "Humanizing Technology," even though tot his day I'm not exactly sure what it means.

That was my second time in the Bay Area of California, and my second societal revolution there. My first was when I was just a year and half old and my mother, father and I moved from Hanover New Hampshire where my father was finishing up at Dartmouth College to Menlo Park California. My father had had a three year mandatory "break" from Dartmouth in the US Army due to troubles in school, but he was back to finish.  We moved to Menlo park so he could go to graduate school at Stanford in documentary film. That didn't work out, and neither did the marriage and for good reasons.

Anyway, by 1969 I was three years old, living with an over educated single Jewish mother who completely dropped and joined the hippie culture. By 1971 she left the drugged out politically active city hippies to join a gaggle of back-to-the-landers on a proper commune in Mendacino California. My father stayed close and visited on weekends. In 1974 my mother and I, with my father's help, moved to southern Maine, the Kennebunk area, after a year in Connecticut ad a "free school." I attended an alternative school called The School Around Us in Arundel Maine, from the age of 8 to 13. We moved around a lot until I was 11, when my mother bought an old house and rebuilt it with help and we lived there until I went to college, after 3 years at the local public high school.

My first formative jobs starting age 12 to 18 were in a candle shop as a gofer, bike mechanic and house painter. College jobs included restaurants/bars, carpentry, feature film and video production and freelance writing. After college in 1993 I started working with the Net and Web. By the mid 1990s I was a webmaster, freelance writer/blogger, and community organizer in San Francisco, CA. During the dotcom boom I followed my passion for education into the field of educational technology and online community. I then worked in industry, higher ed, and K-12 schools. In 2006 I added physical computing, art, and fabrication to my skillset. During the Great Recession, I finally retired as a laptop nomad and happily became a husband, homeowner and father. My hobbies are green home improvement, physical computing/fabrication, photography/video, sailing, hiking and...blogging.